In 2008, Chiara was awarded with the "Leslie S. Ettre” Award for “original research in capillary gas chromatography with an emphasis on environmental and food safety" and in 2014 received the “John B. Phillips Award” for her research activity in the field of comprehensive two-dimensional gas chromatography. In 2016 Chiara was included by The Analytical Scientist in the “Women Power List” as one of the 50 most influencing women in the analytical sciences.

Could multidimensional chromatography become a key tool in environmental analysis during times of crisis?

Regina Duarte (orcid.org/0000-0002-1825-6528) is a Principal Researcher at the University of Aveiro (Portugal); and her research interests focus on: 1| development and application of advanced multidimensional analytical techniques, namely comprehensive two-dimensional liquid chromatography (LC×LC) coupled to different detectors, as well as solid- and liquid-state two-dimensional NMR spectroscopy for the structural and molecular characterization of complex organic matter, mainly from air particles (but also water and soils); 2| development of mathematical tools for data processing in multidimensional analytical strategies applied to complex organic mixtures; 3| health effects of organic aerosols; and 4| wet and dry deposition of organic aerosols.

In 2018, Regina Duarte obtained a Fulbright Grant for Portuguese Scholars and Researchers (Advanced Research and University Lecturing Award in the United States) to develop research at Old Dominion University (Norfolk, VA) in the application of advanced multidimensional analytical techniques for the molecular characterization of the complex organic matrices from air particles.

How microextraction can help in clinical analysis

Barbara Bojko studied laboratory medicine at the Medical University of Silesia (Poland), where she received her Master’s degree in 2001 and PhD degree in pharmaceutical sciences in 2005 with specialization in pharmaceutical biochemistry. The same year she became an Assistant Professor at the same university and in 2009 she joined Prof. Pawliszyn group at University of Waterloo (Canada), initially as a Postdoctoral Fellow and later as a Research Associate (2012-2015). In 2014, she completed her Habilitation (DSc) in the field of analytical chemistry at Medical University of Gdańsk (Poland) and became an Associate Professor at Nicolaus Copernicus University NCU (Poland), where she established her research group. She is also an Adjunct Associate Professor at University of Waterloo, Canada.

Dr. Bojko is an editorial board member of International Journal of Analytical Chemistry, MethodsX and Medical Research Journal and the Advisory Board Member of Analytical and Bioanalytical Chemistry. She is a member of the Scientific Board of the Centre of Excellence “Towards Personalized Medicine" at NCU.  She was also one of the co-founders of Polish Metabolomics Society, where she currently holds a position of Secretary of the Society.

Her research focuses mainly on the introduction of new analytical solutions based on microextraction techniques and mass spectrometry to clinical diagnostics and research in the field of pharmaceutical sciences. Her particular interested is in low- and non-invasive tissue analysis in the field of oncology, transplantology, and translational medicine. This includes particularly the use of Solid Phase Microextraction (SPME) for metabolomic and lipidomic analysis towards biomarkers discovery, spatial and temporal resolution analysis of organs in vivo, and sampling “on-site” in surgery and emergency room as a part of rapid diagnostic process. Dr. Bojko’s research team also works on application of uniform microextraction-based protocols at subsequent steps of drug discovery and development: from high throughput format compatible with routinely used 2D and 3D cell line culturing assays to minimum invasive in vivo samplings of laboratory animals. 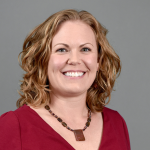 Heather Bean is a bioanalytical chemist working to identify biomarkers of chronic lung infections that can be developed into new clinical diagnostics, with an emphasis on breath tests. She and her research team are applying advanced chromatography and mass spectrometry methods to identify the volatile and soluble metabolites produced by microbial pathogens, both in vitro and in the host lung environment through the analysis of clinical samples, such as sputum and breath.

The Bean research group is also identifying biomarkers that the host produces in response to the microbial pathogens, and biomarkers that the host-pathogen system produces in the unique metabolic feedback environment created during infection. In addition to more sensitive diagnostics, this data may contribute the development of more effective drugs for treating chronic lung infections, such as those associated with cystic fibrosis and COPD.